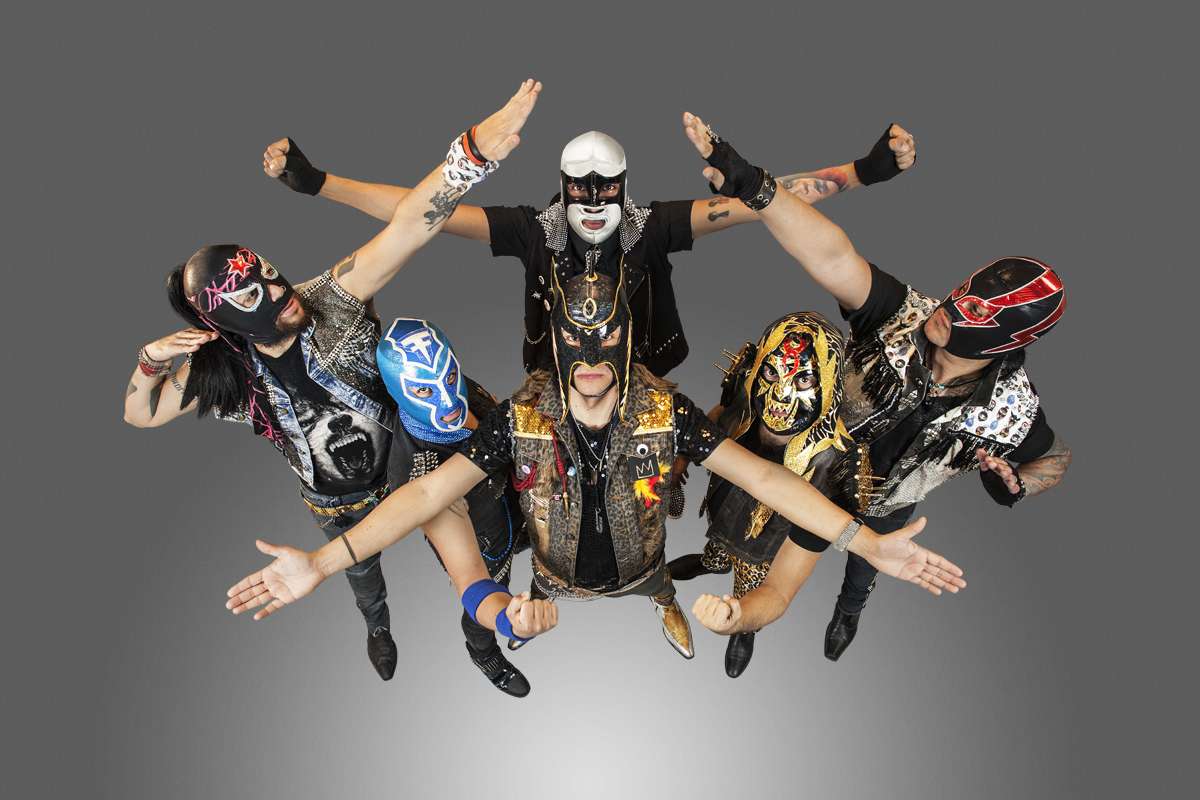 Directly from the city of hope – Mexico City, Mexico – in the month of March, 2012, the six-man group EL CONJUNTO NUEVA OLA released its first musical production, an album that is sure to make history. A very unique musical collective, one that will revolutionize the recording industry. The first promotional single from their album is titled “CHIDO, CHIDO” (“Cool, cool”) a classic title in the history of tropical music, but one that here takes on a completely different vibe.

Despite its track list, EL CONJUNTO NUEVA OLA does not consider itself a cover band. The group members affirm that they “take the work of (de)composing lyrics from powerful tunes like ‘Chicharrona’, ‘El albañil de la pensil’ and ‘Cumbia town’ and others very seriously.”

A peculiar concept with unique characteristics, the group has drawn attention from thousands of people, a fact that has led them to be known also as “los enmarscarados” (“the masked ones”). Their faces are covered with “luchador” (wrestler) masks at all times, hiding the true physiognomy of each group member. This has also given EL CONJUNTO NUEVA OLA a distinctive and authentic feel.

Who are the masked men and what are their true identities? This is the question that many media reporters have asked. No one knows the answer yet, but the truth is that these “anonymous guys” have graced the stages of top Hispanic television networks, including Telemundo, Telefutura and Univision. In all of their presentations, there is one common factor: top notch entertainment and EL CONJUNTO NUEVA OLA’s good vibe, which has not gone unnoticed.

“The fun and good times are a sure thing. The party and enjoyment have a new name with EL

CONJUNTO NUEVA OLA, which is totally clear to see. We are musical wrestlers, and in a short time we’ve had the opportunity to share the stage with talented artists such as Café Tacvuba, Jenni Rivera,

Aleks Syntek, Belanova and Los Tigres Del Norte, among many others,” the group affirms.

EL CONJUNTO NUEVA OLA has also had the chance to perform at radio festivals that boast massive attendance records. The adrenaline, joy and irreverence they bring have become a signature when these

“six chilangos take control of every stage they step on to,” as they like to say. What can you expect if someday you should find these disrespectful masked men up on “el escenario” (stage) or “sexcenario” (sexstage), as they call it? The answer is very simple: a show full of fun and energy, where people dance and laugh nonstop. All attendees will be singing to the tunes of EL CONJUNTO NUEVA OLA. At the group’s shows, the youthful audience will pour heart and soul as feedback to an exciting musical collective, while the adult audience will delight in the new lyrical versions of what were once their favorite hits, making this a complete party with fun for all ages.

In 2018, the group opened for cumbia darlings Los Angeles Azules in Dallas and Los Angeles, reprised their role as the house band for the fourth season of the Lucha Underground, and played El Grito, a twenty year tradition honoring the Mexican War of Independence, sponsored by Los Angeles City Hall.

They participated in the annual world music conference hosted by the Association of Performing Arts Professionals (APAP). They even took to the skies, traveling to Detroit to participate in the Concert of Colors world music festival.

EL CONJUNTO NUEVA OLA is a group that is here to stay. A musical concept that will revolutionize pop music in 2012, the group will continue to exist for years to come. They are the self-proclaimed “disrespectful musical wrestlers.” But they are also young professionals who, with their first album, are providing creativity and freshness to a worn-out record industry. That – and much more – is what EL CONJUNTO NUEVA OLA is all about.